Carrot Soup was lovely, we added 1 chopped red pepper and 1 celery stalk to the mix, after blending it, we topped it with chopped almonds and parsley 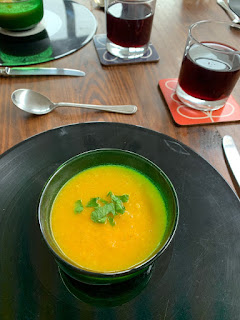 Our main meal as Leek, Pea and pesto risotto, although it called for 200 gr kale, which we did  pick in the allotment, by the time we were back, Carmen and Julie who stayed to stir the pot, felt there was already so much in the risotto it would have been over kill. So we left it out.
When we plated it up we stirred some gorgonzola and parmesan through it and topped it with pea shoots.

The chickpea brownie waffle went down very well too.
we used the chickpea brownie recipe from the 3rd cookery book but rather than pouring the batter in a baking tin and put in the oven for 30 minutes. We put a dollop in the middle of the waffle iron to make them into little waffles,  we then topped them up with lemon mousse. 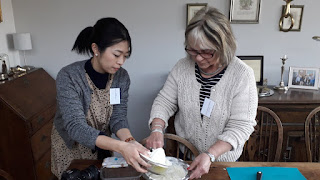 For this we had 400g cream cheese, 1 cup icing sugar, juice of 1 lemon (we used 3 small limes) pinch of salt and 1 cup of the whipped aquafaba. We mixed everything except the whipped aquafaba, then folded it in.  Part of the mousse we put in small dishes (to give away to some of the residents of Victoria Homes) the left over was put in the fridge for 1 hour and used to top the chocolate brownie waffles. 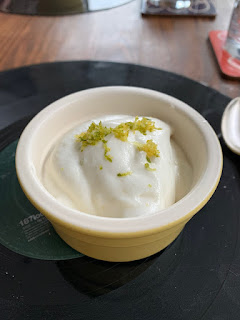