Today I was walking in my garden and noticed that the grapevine needed pruning, so used the leaves to make the domades, just like we did a few years ago.

After a little Skills Exchange workshop where Eileen showed us how to use the vine leaves that she pruned off her grape vine, I decided to include this in our from spade to plate session. I found this little video online on how to make them

Gluten free, dairy free and 'stuffed' full of minerals and vitamins, what a great idea 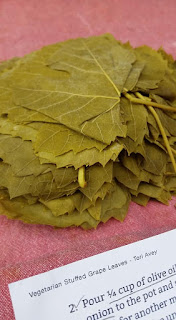 As I wanted to make sure that the leaves were very tender, I picked them from my garden yesterday and put them in brine over night. This morning, rinsed and dried them in readiness for further preparation by the group.


We started by making the stuffing following  Tori Avey's  (but added some sundried tomatoes.and green split peas)
Dill, mint, pine nuts, lemon and onion were all mixed in to provide a lovely fresh mixture. 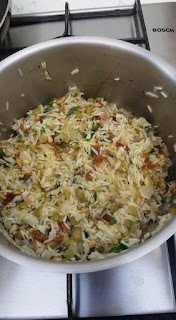 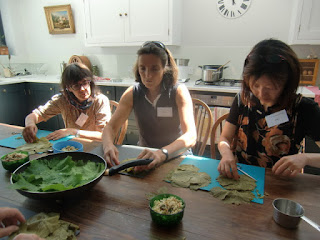 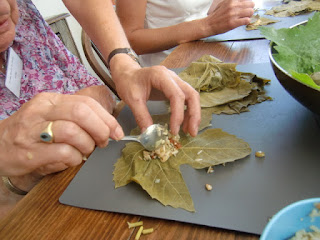 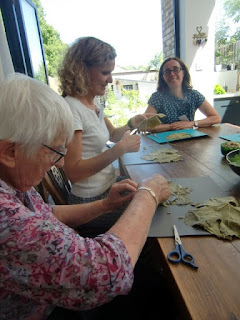 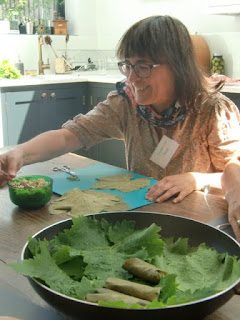 The weather has been hot over the last few weeks so not very good for the lettuces, which are about to bolt, so decided to turn it into this creamy lettuce soup that could not be easier and faster to make.


Together with a little slice of bread (baked in a small Ball Jar)  the lunch became a mini feast.

Whilst the filling was cooling and the lettuce soup was set aside, we walked to the back of the house where there was (the neighbour's) grapevine trailing over the fence and in need of a hair cut. We killed two birds with one stone, one the neighbour had their vine pruned and we had some leaves to take home and put in brine ourselves. 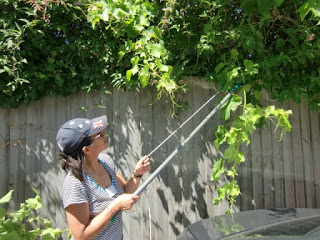 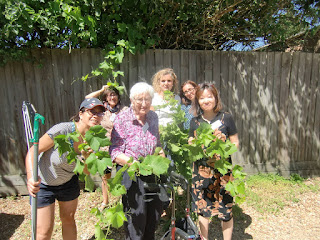 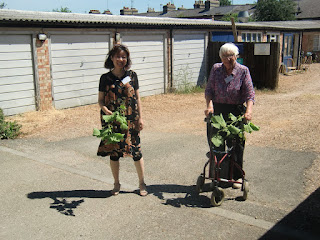 When we came back and had prepared the leaves for the brine, the table was laid, chilled soup dished out and the dolmades were gently simmering away.

We served them with a mustard dill sauce, we used dandelion jelly as sweetener but you can use honey or sugar if you prefer to do so. 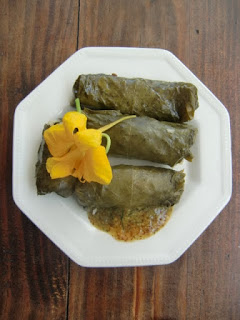 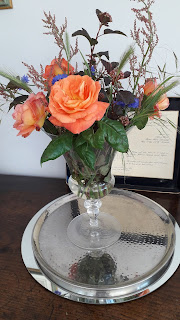 So lovely looking back at what we did last year around this time.  on the 6th May 2019,June,
Megan, Olivia, Violet, Liz, Rozenn and I had a lovely time. I thought I make this meal again, and savour not only the food but also the memories.

The perpetual spinach is about to go in flower so we harvested what there was to turn into Sag Aloo with chickpeas. Meghan brought Olivia and Violet who were great helpers.  We also picked some m lemon balm  to put in the dessert but the violets, calendula and borage were to  decorate our lemon mousse. 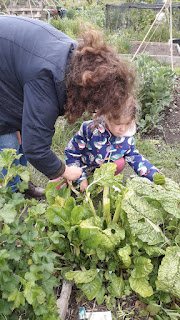 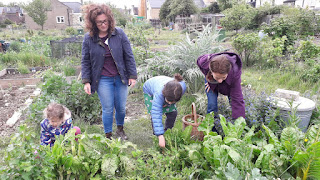 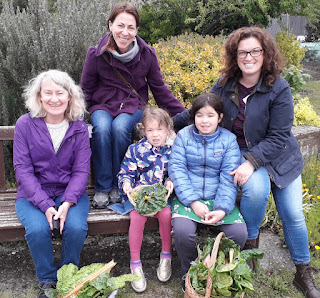 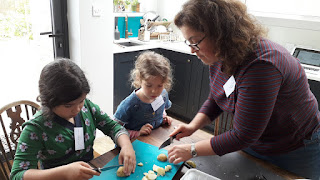 Back at home, the chopping started.

As a dessert we used the chickpea water to turn into lemon mousse.


The Sag Aloo turned out really well.  We had it with rice and flat bread.


I saw Diana' Henry's Lavender cake in the House and Garden online article and thought to make it, with lilac instead and when later in the season the lavender is blossoming, I will try it too. 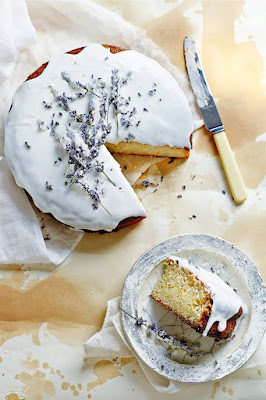 Hip Hip Horaay! From Spade to Plate is 3 year old this week. 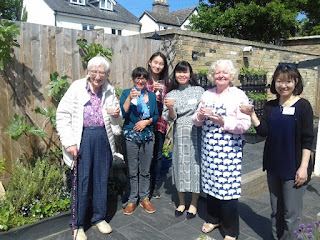 Hip Hip Horaay! We are 3 this week

I am celebrating it with a freshly made mock Rhubarb Bubbly!

Rhubarb cordial.  Two years ago we made some vegan rhubarb fool out of the left overs.
Today however I made a rhubarb crumble with it. 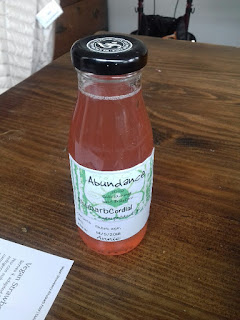 With so much spinach (beet) in need of eating, we made this
Spinach torte a filling meal. As in total it takes 50 mins to make, We started this pie and whilst in the oven we went to the allotments for a stroll. We pick the lettuce to accompany the meal from the back garden. 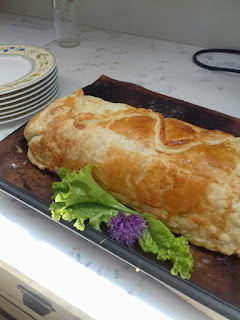 Rhubarb cordial. We made some vegan rhubarb fool out of the left overs.

Today I am transplanting the first sweetcorn of this season. I love the cobs fresh in the field. No cooking, just the juicy fresh kernels on a hot summers day.
I had so many last year that I could not eat them all at that time so I froze a large amount of them.
Being in lockdown and clearing out the freezer, I found the last of them and looked for a tasty recipe.
I found this chowder so that is lunch sorted. 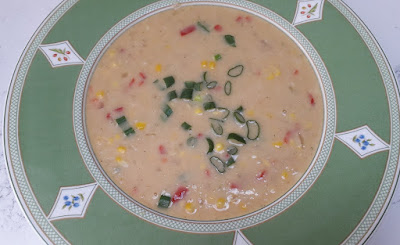 We already had a couple of handfuls of asparagus, one handful went to Mike as he LOVES them and this is a real first of the season treat. 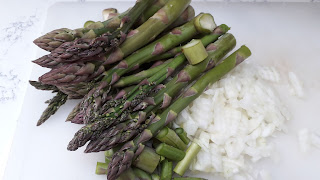 The other handful I used to make this Asparagus soup  It is simple to make and very tasty too. 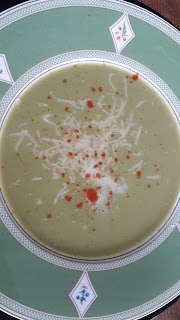 These recipes were first posted on 1/5/2019.
I have updated  it As the last 3 weeks have been un seasonally warm and dry, the lilac blossom is peering over the fence.

I miss cooking it with Melendra, Sayaka, Simone, Tina and Yasmin so will be doing it for Mark and myself, and maybe it inspires others to try it out. 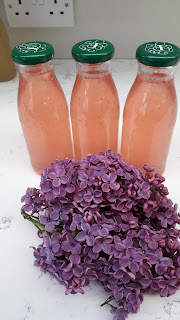 So  I did the lilac syrup which turned pretty pink when mixed with sparkling water.
As a main course we had the Asparagus and lemon orzo (it was a little on the salty side) but found out later that we had forgotten to add the dressing. Believe it or not, it was still a lovely meal.. 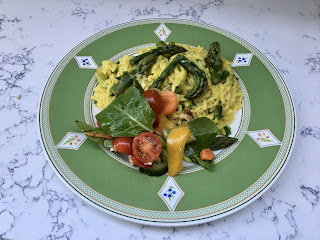 Because of the last warm weeks, the chard is starting to bolt so I made a soup with this spinach tasting vegetable.  It was lovely to mix with frozen peas as well. With it, we also made a basic bread roll using the potato yeast which I made over night.  With a shortage of dried yeast this is a great find.

As a desert we had our lilac biscuit.
Posted by Karina at 06:37 No comments: