Today we are ploughing through 5 huge courgettes as the sun and recent heavy rain made them grown so fast we could not keep up with them.

Although our group today was small as most of the from spade to Plate members have returned to their countries or have gone on holiday, we managed to use almost all of the courgettes. 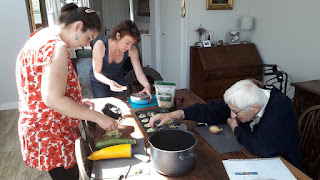 So together with Lucy (and baby Thomas), June and Rozenn we turned them in a delicious creamy Plant based Courgette soup 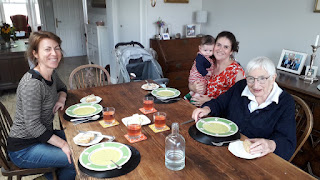 We made some Courgetti Spaghetti 'nests' we put them in a muffin pan, added, some finely chopped onion, olives, fetta cheese, cheddar and a mix of egg and a little white wine. This went into the over for 20 minutes  to have as a little appetizer. 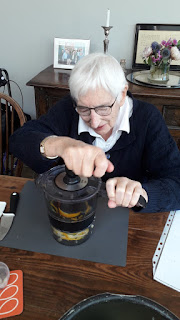 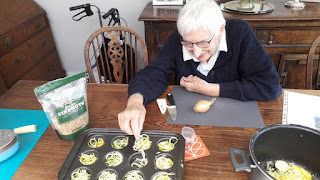 The rest if the courgettes were turned into a Lemon Courgette cake. We added poppy seeds to the recipes and a handful of blackberries from the garden.  It turned out lovely 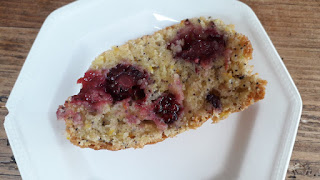 Pappardelle with peas, broadbeans and parmesan and lovely waffles

May be not the cleverest thing to do, but we made pappardelle for 7 people today. The kitchen surfaces were covered in drying pasta. The first batch (left over dought from yesterday's meal) had been in the fridge over night and came out beautifully. Nice thin pasta that once cut, dried instantly (well, almost instantly) The newly made pasta dough (2 cups of flour, 2 eggs, a little salt, some oil and water, was a bit sticky and needed lots more flour to work with. Despite this, the food was delicious.
Whilst we were waiting for the pasta dough to rest, Mark revealed the first audio reading of his book College of Shadows for the critical listeners to give feedback. We all agreed on pace, type of voice etc so he can go and pass on this useful info to Howard directly.  Thanks ladies!

We also made Belgium Waffles with this tasty lemon and raspberry sauce. We picked the raspberries from the back garden.
Then we went to the allotment to pick the mint that went so well with the peas and beans in the pappardelle. 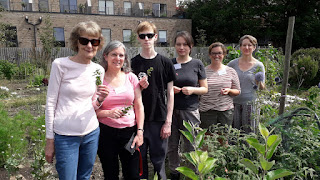 When we arrived home, we put the whole lot together and within no time we were dining like a King and Queens. Must do this again, it was so tasty. 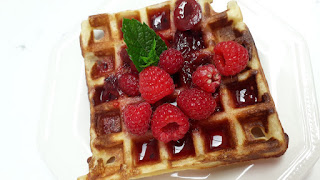 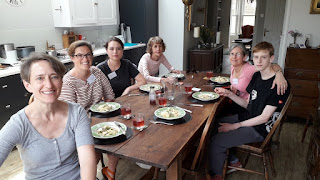 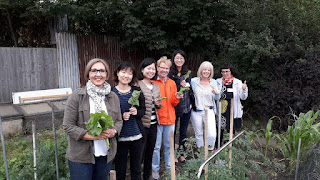 As we are inbetween crops at the moment and I only have some fruit and perpetual spinach growing in the allotment, we are making a curry including the spinach amongst other pulses, spices and bought carrots. 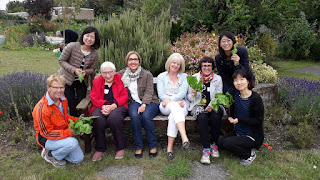 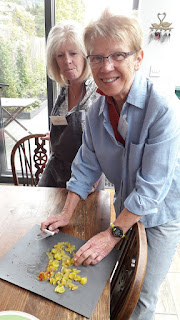 For desert we made these Belgium raspberry waffles with lemon raspberry syrup. 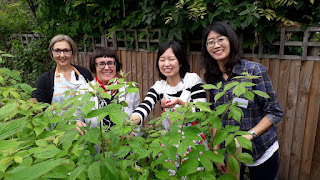 Terry arrived early with a freshly foraged bag of bullace plums from Wolfson College,we included them in the sauce too and tasted sweet and yummi!

I have decided to make this Curry with rice, a dollop of greek yoghurt and coriander. 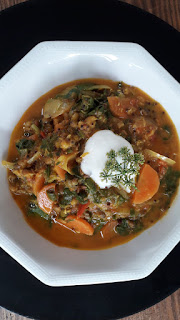 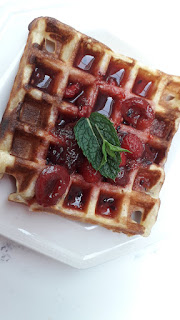 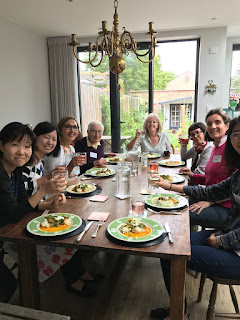 Chick peas to use up

As this weekend I made some lemon mousse made with aquafaba, I had rather a lot of chick peas to use up.

I therefore decided to make beetroot hummus (I added a beetroot and some feta cheese to this recipe)
I also felt that 1 cup of chick peas was not enough, I virtually doubled it not needing to adjust the spices or anything else.

We had these with the Falafel which Hiroe fried beautifully. We all agreed these were the best we have ever had. 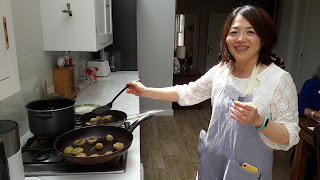 Then we decided to make the pita bread, we all felt this recipe was the best we have ever made, and according to Simone, Much, much better than from the shops.

We went to the allotment where we harvested lettuces to go with this feast, some sunflower buds to have as an alternative to artichockes.  I harvested one this morning, but it took nearly 1 hour to cook and as I was told that the sunflower buds only take 3 minutes to cook and taste similar to artichokes, we had to give it a try. For nearly every one having a artichoke was the first time and both June and Simone, were making sure not one leaf was left untouched!  The sunflower buds were messy to prepare but very quick to cook (3 minutes). they did taste a bit like artichokes but maybe with a hint of little bitterness.  We had them with a vinegrette sauce. Good we tried and good to know that the whole floers is edible. 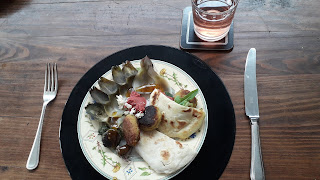 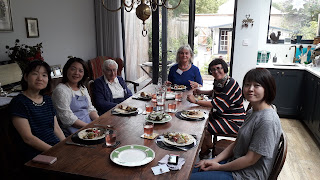 With still a bag of rhubarb in the freezer and it is time to start making space for produce from the garden, we made some Rhubarb cordial, with orange, lemon and ginger together with some fizzy water a delightful summer drink.

We went to the allotment to pick the heritage broad beans, the purple flowers were lovely in spring, but the leaves now have become spotted with rust. it did not damage the beans though so the Broad Bean Orzotto became a lovely treat.  We had this with the green salad which we decorated with flower petals (calendula yellow and orange, corn flower, and borage) some chopped walnuts and feta cheese.

The last group picked all the peas, enough to put some in the freezer, so we managed to use them for the Tummeric and Pea soup.

One of our members, Annie, contacted me if we could do a special special for her friends who came over for a couple of weeks from China.  We had a lovely time.


Then we harvested all the peas from the back garden and then planted some french beans. 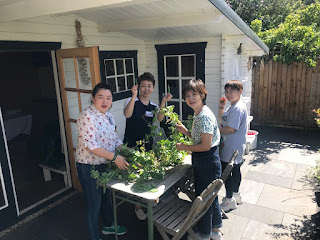 The peas were picked for the pea and broadbean  risotto  which went really well with the green salad (with a hand ful of strawberries). For afters we made the vegan strawberry and banana ice cream..

Bob my neighbour is on holiday and he contacted me to  pick the sweet peas so they would keep on flowering. What a better occasion to do this today. We all picked a bunch,  the girls gave one away to Betty and the others to some complete strangers on their way to the punts. 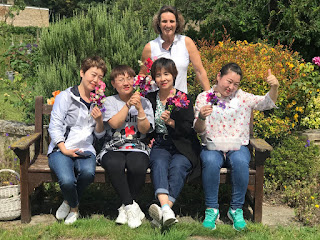 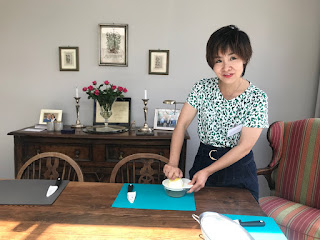 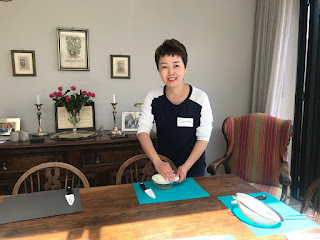 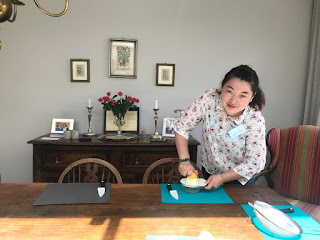 Using the grey oyster mushroom  from the funguslab.com that we grew over the last month or so, we made some delicious mushroom tartlets with new potatoes,  french beans  and salad.
A very easy meal but out of this world scrumptious. 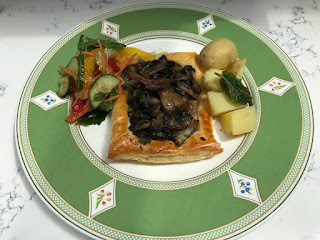 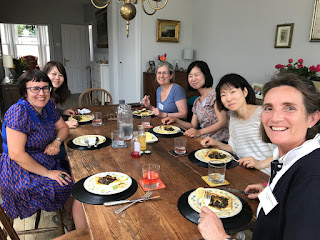 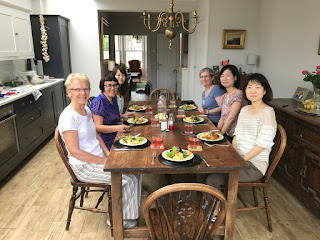 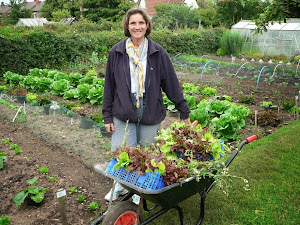